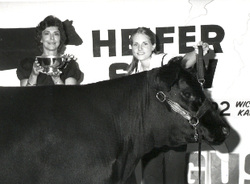 Mike Colvin and Mary Ferguson have been breeding registered Angus cattle since 1969. Both grew up in Ohio and were involved in 4-H and the National Junior Angus Association as youngsters. They each successfully showed their junior project cattle throughout the 1970's and early 1980's, and Mary won the National Junior Angus Showmanship Contest in 1980. In the fall of 1979, Mike began attending Ohio State University, and Mary moved to Manhattan, Kansas, where she attended Kansas State University. Both majored in animal science. Mary went on to obtain a masters degree in animal production, with an emphasis on beef cattle reproduction.

Mike and Mary were married on April 15, 1993, and immediately began searching for a ranch in the Kansas-Nebraska region. In the early spring of 1994, they were able to purchase 53 females from the cow herd Mike had developed at Colvin Angus Farms, and they moved to Luray, Kansas, to begin building Wolf Creek Angus Ranch.
Wolf Creek Angus Ranch includes approximately 1,260 acres of deeded native pasture, with an additional 1,000 acres of leased native grass, as well as 300 acres of brome and other grass hay and 125 acres of alfalfa hay, which is harvested in large round bales and used primarily as a cash crop.
Powered by